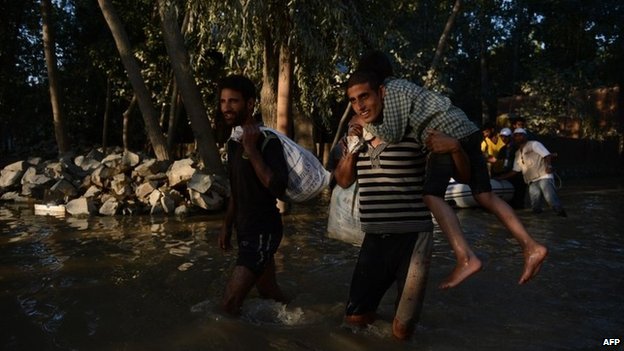 The floods, worst in several decades, left tens of thousands trapped in the swirling waters

In my 25 years as a journalist in Kashmir, I have not seen as much despair and helplessness as during the recent floods.

Tens of thousands were trapped in the swirling waters and the exact number of deaths is not known even today. And with no officials in sight, people were left to fend for themselves.

Prime Minister Narendra Modi visited Jammu and Kashmir to take stock of the situation on 7 September, but could not visit any place in Srinagar by road.

Soon after the city turned into a lake, the Indian army and air force provided the only government presence. But they too could not cope with the situation and were even accused of being selective in rescuing the people.

In this situation, local volunteers emerged as a ray of hope for those who were stranded.

On 8 September, as I went out to rescue the relatives, I saw fellow citizens not affected by the floods going to the flooded areas to get the marooned people out.

With the help of a friend I succeeded in evacuating my relatives and inspired by the selflessness of the volunteers, I decided to make rescue my mission for the following eight days.

In the past week, I saw that whoever was in a position to reach a flooded area was on the street to help the thousands of people who were trapped and those who had safely come to the shore. 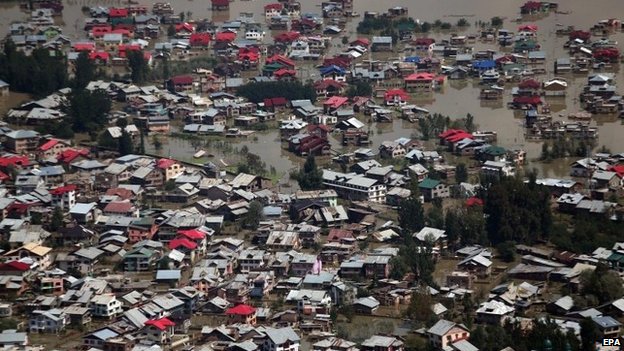 Many homes and key buildings in Srinagar remain submerged

Truckloads of relief material, such as fresh vegetables, rice, flour, fruit, water and other essentials have been sent.

Though unorganised in nature, this network of volunteers is doing a commendable job on the ground that is still under water.

In the absence of boats, they have made rafts by joining plastic drums, truck tubes, and wooden poles to reach out to the stranded people. I was surprised to see that even those whose homes were under water were out to rescue others.

Sajjad Sheikh, a lawyer, told me he had hardly slept for more than four hours a day for the past nine days.

“I raised a loan to buy the boat, but it was necessary. Who could I go begging to for a boat to save my people?” he said.

There are many like Mr Sheikh who have made a difference in Kashmir in the last few days – non-governmental organisations like the Zakat Foundation are running boats with help from Kashmiri volunteers and the National Disaster Response Force (NDRF) is doing a good job in rescuing people.

I met Muhammad Ali Lone, a senior government officer who was helping pull out a boat stuck in deep waters. “I do it for God,” he tells me. 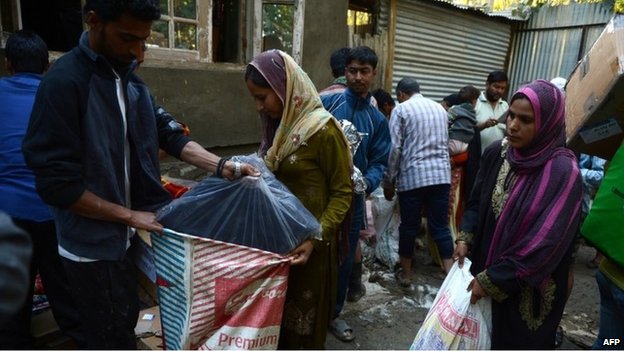 Free food is being distributed along the roadside to the “homeless” and tents with community kitchens have come up on the grounds of mosques.

Many youth have also acted as voluntary traffic regulators to direct cars and rescue vehicles through narrow lanes and by-lanes, as the main roads were closed.

“If we don’t do this, there will be chaos and confusion and the already traumatised people will suffer more,” said Musadiq Ahmad, one of the volunteers.

With the sun starting to shine in recent days, Srinagar has seen people from the other parts of Kashmir starting to bring in relief to the city and the situation appears to be easing now.

When I step out every morning, I see new medical camps that have been set up to treat the sick.

“We have thrown our doors open. But we have no medicine and there is no electricity,” hospital owner Asif Khanday said.

Many doctors and nurses have come out voluntarily to manage the camps.

“The magnitude of the tragedy is huge and we are heading towards a health emergency,” said Dr Yasir Wani who is working at one such camp.

The floods are one of the biggest challenges the Kashmir Valley has faced in recent years, but the compassion shown by Kashmiris towards their fellow beings gives me the hope that we will overcome these most difficult times.

The Jammu and Kashmir Administration on Saturday sacked its four employees, including son of Syed Salahuddin, the chief of banned...

Protests mark anniversary of ‘black decision’ Kashmir witnessed a street protest by the leaders of the Peoples Democratic Party (PDP)...

Politics over the Har Ghar Tiranga campaign is gaining momentum ahead of the 75th Independence Day celebrations in Kashmir, as...

A total of six Kashmiri Pandits have been killed by terrorists in Jammu and Kashmir between 2020 and 2022 so...

The heat wave continued to grip Kashmir on Tuesday while Meteorological Department (MeT) has predicted rains from Wednesday for four...

In the next two immediate days, much of the talk revolved around disaster management and incorrect weather predictions and the...