Refugees from Pakistan-occupied Jammu and Kashmir (PoJK) today participated in a rally in Jammu, organised by the J&K People’s Forum, to paid homage to those who were killed in the occupied region during raids of Pakistan’s tribals in 1947.

Different social and religious organisations of the community took part in the rally in which they vowed to get back the PoJK from Pakistan. Bollywood actor Mukesh Rishi also addressed the gathering.

Members of the community recalled the sacrifices of PoJK refugees who had to come to Jammu and other areas. While remembering the areas their forefathers left, the members said those areas must be reclaimed now.

Surendra Jain, leader of the Vishwa Hindu Parishad (VHP), said the Article 370 had become a history and reclaiming parts of J&K under the occupation of Pakistan and China would become a reality soon.

Jain said, “The role of a few families who ruled Jammu and Kashmir in the past decades is over. Now, the people of UT will run J&K.” 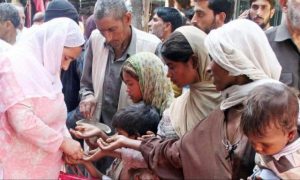 At least 11 labourers have been detained by the Territorial Army for allegedly clicking pictures of an Army installation in...

India is reviving a network of thousands of village guards in Jammu and Kashmir, including arming some with automatic rifles,...

A complete shutdown was observed in Poonch, about 235km from Jammu, on Wednesday to protest the terror attacks in Rajouri...

All the residential and commercial properties falling in the Jammu Municipal Corporation (JMC) limits would be geo-tagged and a unique...